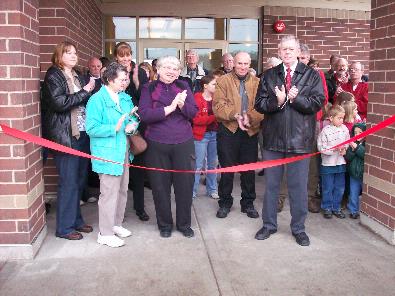 March 10, 2009:
The new Brodhead Memorial Public Library opens to the public--2 months ahead of schedule!  Mayor Doug Pinnow does the honor of cutting the ribbon and opening the doors to the public.

July 18, 2008:
City Council approves starting the library building project by borrowing $1 million from the Sugar River Bank and Bank of Brodhead .  The building contract was awarded to Roberts Construction Company of Madison, WI.

2008 June 12th:
June 12, 2008, sealed bids were publicly opened and read aloud by Jim Gersich of Dimension IV at the Brodhead City Hall.  Roberts Construction, Inc. of Madison, Wisconsin submitted the lowest bid for $1,394,000 and included a 2nd alternative bid for an additional $55,000 for a sprinkler system.  Gersich reviewed the bid and verified that it met all the library's requirements.  The Brodhead Library Board met June 17 and approved the bid and will ask the Brodhead City Council to enter into a contract with Roberts Construction, Inc. to build the library

2008:
Advertisement for bids for the construction of the Memorial Public Library published May 14 and May 21, 2008.

1999-2003:
Begin looking for building sites.  Members of the board began gathering information on five possible site in the downtown area. Because of clean-up costs or other major factors such as lack of parking, size, or unavailability, these sites were not included in final selection.  Other properties were also investigated and evaluated from the Century Satellite building, property on County T, city-owned property on the race, etc.  Finally, in 2002, the choices have been narrowed down to three--present location at 902 W 2nd Avenue, one acre located on 25th St., and one acre located on 21st St. behind McDonald's.

Library Endowment fund was approximately $32,600 at the beginning of 1999.  Library Board designated this as the Library Building Fund.  As of November 2002 the fund has reached in excess of $84,000.  On-going efforts are being made to increase this fund.